The Root Ball, on the Hawaii Pacific Review 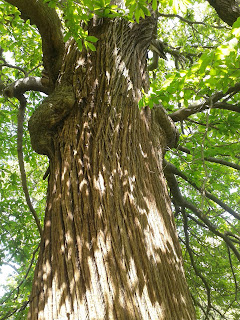 (This story was written during a Leverhulme Artist-in-Residence grant at University College London, in 2015, in which I collaborated with UCL's human geographers on various writing and artistic projects.)


The hole is getting bigger. The root ball of the cabbage tree sits in a kink in the corner of the compound, waiting to be transplanted. But her husband is digging away, and her mother is watching, hands on hips, looking grim. Again and again the spade splices the loam. Again and again the soil spatters on the expanding mound of leftovers. Sweat streams down Ahiri’s face, and there are pools developing around her hip bones.
“I guess it’s my turn,” she says.
“I can finish it,” Jesse says.
“I’ll do it,” she says firmly. “Does it have to be bigger?”
“Twice the size of the root ball,” her mother says.
It takes another fifteen minutes of digging before her mother is satisfied.
“There,” says Ahiri, kneading her lower back. “Surely it’s done now.”
Her mother gently unfolds the wet tarp that is protecting the taproot. She brushes off the hummus that is clinging to the new roots. Then she glances over at Jesse. Jesse lifts the tree, newly dug out from outside the compound, pruned last year in preparation for this move. He lugs it over and places it at the edge of the hole, but whatever he is planning to do with it is cut short as the tree crashes in. Her mother cries out. “The new roots!”
It’s okay, Mum, it’s just a tree, Ahiri wants to say, but her mother is delicate around her plants, minding their feelings and tending their wounds, skills she has never developed for her daughter. Ahiri and Jesse squat, trying to make it right. The leaves are long and prickly, the bark tough and leathery like cork. It is impossible to reach down and right the tree, without getting stung in the face. They try to nudge the tree into the centre. When Ahiri’s mother is satisfied, she starts to throw the earth back into the hole. Ahiri and Jesse join in, cushioning, padding, kneading out the air pockets, till the hole is filled. Her mother places mulch all around the tree, and then irrigates it again.
Read the rest on the Hawaii Pacific Review.
Posted by Amita Murray at 10:58