Banksy and the street artists 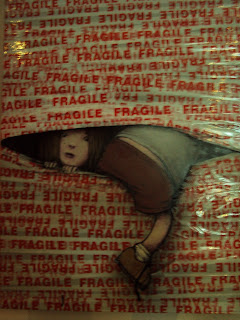 
“I wouldn’t Banksy on it.”
(quote from Banksy’s film Exit Through the Gift Shop)
I won’t say that Banksy’s pop-up shop on was teeming with people breathing down each other’s necks on a Monday afternoon, but there was a steady in-flow of young women with slanting razor-cut fringes and trendy trainers, and bearded, bohemian arty types, despite the Winter Wonderland that is this December. If you’ve had enough happy-sappy Marks and Spencer’s ads that are more an advertisement for Christmas than for clothes or food, and incessant reruns of the Nutcracker at every theatrical venue just make you want to scream, then street art may be just the right medicine.
This autumn, the pop-up shop featured works by Toulouse-born artist Dran, bringing with it the usual features of Banksy’s art: a dry, subversive, hand-on-the-crotch kind of humour, and beautiful, lonely characters that do what you’re thinking but are too afraid to say. The shop, called Marks and Stencils, was home to an exhibition of pictures, installations, postcards and objects and it was organized by Pictures on Walls, an independent collective, founded in 2001, of self-proclaimed “disaffected (meaning failed) young artists unimpressed by the art world’s obsession with pretentious waffle and warm wine.” Hmm, I don’t know about you, but I have nothing against a seasonal glass or two of glogg…
Earlier this year, rumour had it that one of the Turner prize judges, Andrew Nairne, had been heard to offer praise for Banksy’s art. He said he found it “twee” (he should watch Larkrise to Candleford if he finds Banksy twee) but also “funny” and “original.” Of course, it’s a long cry from praise to actual nomination, and as the spring-time nominations revealed, despite Banksy’s successful show and his self-deprecating film Exit Through the Gift Shop, there was no Banksy in the mix. But the question is, if ever nominated for the Turner prize, would Banksy still be Banksy? Would Banksy maintain his power to be the anonymous, dissident voice in British art, or would the art world appropriate him and make of him the prodigal son?
There is nothing of the prodigal son about Dran, or at least, his characters. His pictures feature Scribouille, a homeless puppet who lives only for his art. Dran’s characters look forlorn and fragile, living on the margins of society, picking pockets or making art for a living – two careers that perhaps figure as one and the same in Dran’s caustic view of capitalist society. One picture, called Tame the Fear, is of a little girl offering sheaves of grass to a wooden horse suspended on a spring. Camouflage, a picture and an installation, oddly features a polar bear that looks like the sinister animal in the Birds Eye advert, that is always watching you to see if you’re eating the right kind of frozen peas. Unlike street artists such as UK-based Dan Baldwin, or the Graffiti Kings, whose art often looks like a hallucinogenic flashback with whirling stabs of colour, Dran’s art shows a person caught in a moment of discovery or longing. 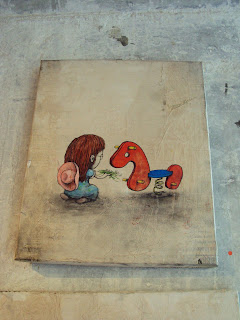 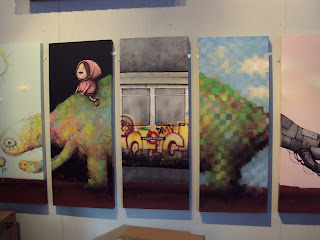 Dran has been making art since 1995, and in that time he has published six books about his art, and featured his murals and pictures in many exhibitions – thereby becoming an oxymoron, a successful counter-culture artist. Dran calls his work “My Everyday Life,” the name given to the first of his exhibitions with Pictures on Walls. And as Pictures on Walls reveals, Dran’s work is not only his everyday life, it is something he does practically twenty-four hours a day. His pictures are oddly endearing, beautifully drawn, and full of wit. Street art or not, he is considered one of the most important artists of the century and he is being drawn from the margins and placed bang in the centre by galleries keen to capitalize on the growing celebrity of kooky, non-mainstream artists.
To get your regular dose of street art, pop-art, graffiti and counter-art, visit London’s non-mainstream galleries such as Elm Lesters Painting Rooms, Brick Lane Gallery, and Paintings on Walls in the new year, or just hang out in the East End and wait for a skinny, shifty, matted-hair guy or gal in a hoody to walk by with a spray can.
Posted by Amita Murray at 04:38