My Clothes and I

I was writing an article for Radia magazine on the exhibition Aware: Art Fashion Identity, showing at the Royal Academy of Art, and it made me think about the lies we tell with the clothes we wear.

The clothes in the exhibition tell tales of grief and loss, nationalism, migration, an artist's journey to make a piece of art, and the journey of a piece of clothing as it decays over time. Fewer exhibits, though, uncover the role of clothing in hiding, masking, disguising identity, in mingling with the crowd, in telling lies. We choose clothes not only to express and to stand out, but also to not stand out. When we want to be 'different,' we do it in tediously unoriginal ways, we choose out of the acceptably chic in-season options concocted by Vogue and marked down by Primark. We use clothing to hide cultural affiliations, class belonging, an expanding bottom, a disastrous trip to Supercuts, unshaved legs, one too many G and T's the previous night, the wrong accent, unwashed hair, evening plans or lack thereof, feelings of inadequacy, and a suntan gone horribly, horribly wrong...

Denim jeans have to be one of the biggest inventions of the post-industrial revolution era. And jeans hide a multitude of sins. When Jacob Davis and Levi Strauss first came out with denim jeans in 1873, I bet they weren't thinking that it would be the one article of clothing that would be worn by everyone from the future king and queen of England (I mean William and Kate, not Charles and Camilla, or David and Posh), to a drunken miner in Wales emerging from the local public house and staggering over to spend the night with the village sheep before they sacrifice their coat for angora, to little Ayesha performing a Bollywood recital for the Miss Asian-Leicester beauty pageant. I would even say, if I didn't mind sounding maudlin, that despite the gargantuan different in price between various labels, denim jeans must be the one consumer product that levels the playing field, homogenizes the classes. It's like the public house of the clothing world. It's the community-unifying national environmental disaster of the fashion arena. It's like football, or fish and chips, or Christmas.

One of the exhibits in Aware, called 100 Ways to Wear a Flag, by Alicia Framis, shows the Chinese flag worn in sixteen different ways, as a skirt, a toga, a sarong, a hat. I don't know about you, but to me no matter how many different ways you wear it, you can't escape it - it is still the Chinese flag. (I mean, you can make a McBurger look like food, but it's still a McBurger, right?) It may sometimes be about spectacular Olympic engineering, but the flag is also about coercion, colonialism, and brutal homogenization.

Talking of colonialism and globalization, Yinka Shonibare's Little Rich Girls is a collection of dresses for girls, in traditional African colourful batik. The history and migration of batik, though, as Shonibare will remind you, is complex. While batik has a rich past in countries like Indonesia and India, history suggests that it was Dutch colonizers that contributed to the movement of batik from South Asia, through Europe where it didn't find enough of a market, all the way to the Yoruba in Nigeria. Who knew... 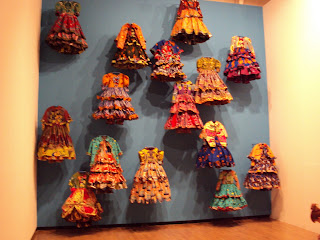 Gillian Wearing's Sixty Minute Silence is a video of what looks like a standard-issue group photograph of a police precinct. Bobbies stand and sit in dignified silence for a group picture, but gradually they start to fidget, scowl, yawn and scratch, revealing individual personalities.

We wear uniforms all the time, everyday - school uniforms, policeman's blues, doctor's coats, military fatigues, black suits worn by 99.9% of the people that get off at Canary Wharf in morning rush hour, goths, people in clubs doing their ninth tequila shot, Christmas shoppers with prams in their beige skirts and gray woollies, PTA mums, can-can dancers, MSN Lifestyle fashion-advice wearers... We make judgements of the 'right' kind of clothing to wear, and most of us who choose to live in society shudder in shame at the memory of turning up to the right event in the wrong gear (and wet dreams about carrying it off and being the ONLY person in the gig dressed EXACTLY right, thereby setting overnight fashion trends and making history).

Do we choose clothing that expresses our inner truth, or just stuff that says I'm normal and I'm not fat...?
Posted by Amita Murray at 07:14