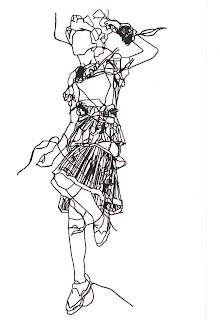 A Life of Its Own
(A shorter version first published as The Craft of Clothes on http://www.brightonfashionweek.co.uk/blog)
When I go to an exhibition I want to feel sick with anxiety. I want to be rushed, ogle-eyed, and overtaken by the fear that no matter how many times I run frenetically around the space, I’ll never get to see all of its wonders. I want to worry about the possibility that while I’m staring in perplexity at the wonders of poodle-grooming, I’ll miss the heart-rending talk of a transgender prostitute from . What I don’t want is to walk into a gallery, turn three-hundred-and-sixty degrees, pirouette half-heartedly into the far left corner, and know that I’ve seen all that the gala has to offer.
So, in that sense, The Art of Fashion, a little pop-up concept show running during London Fashion Week, was not exactly the heady culmination of my dreams. It felt a little like a child who has been sent to his nursery to play tea-party with his imaginary friends while his parents throw an extravagant ball and banquet featuring Beau Brummel.
Though I must stop and ask myself, am I turning into one of those quantity-over-quality people? Am I, horror of horrors, becoming a size-ist?! As Hannah Montana might say, O.M.G! The miniscule exhibition of quirky fashion illustrations that are objet d’art in their own right is housed in the basement of ’s Fashion Capital on Seymour Street, a lush tucked-away boutique that features emerging British designers. When I walked into the shop, I was outnumbered three-to-one by shop managers, but, despite being size-challenged, the exhibition featured eye-catching illustrations. 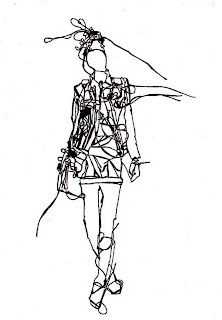 graduate Emma Cowlam’s hand-stitched fashion illustrations are intricate, delicate and, at the same time, full of character. She manages to imbue black thread stretched across white paper with attitude, pizzazz and movement. Each drawing looks as if it has almost too much energy. The black thread fizzes across the paper, and sprouts bursts of life in what often teeters on the edge of being too much detail, but what, in fact, seems to imbue the drawings with personality. A woman in a trench-coat and head scarf, a librarian that teeters between the trendy and the cautious, a student whose frenzied head gear displays her absolute tiredness with theory, are some of Cowlam’s pictures. Cowlam has recently exhibited in the craft shop Homemade London, and been published in Elle magazine. 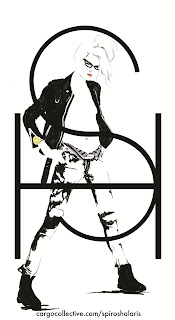 Another exhibitor, Spiros Halaris, a student at the London College of Fashion, works with hand-drawn and digitally-crafted images. His designs that mix the monochromatic with sharp outbursts of pigmented colour display urban chic. A long-haired young man with sad eyes, wearing kooky brick-red coat tails, and ghetto trousers, a robotic mime artist bent sideways, a woman in a black smudge of an evening gown, walking to a red-carpet night, ambivalent about the accolades – the illustrations are a more dynamic and skilful, but perhaps less edgy, version of another illustrator, Bridget Davies’s portraits (not featured in this exhibition), which she compares to the fashion images of the first half of the twentieth century. Halaris’s illustrations have featured around the world, most recently at the Barbican, and in many design books and magazines. His clients range from prosaic computer and business magazines to Topshop.
Then you have graphic art from a collaboration between fashion designer Afira and fetish artist Sardax. Dark Daze, a collection made of crime-noir comic-strip like images, depicts female power, and the play between strength and submission, where strength teeters on the borders of aggression, and submission is really a seizing of control. Afira says that in this collection she hopes that people will see women “experimenting with, enjoying and flaunting their sexual power.” Amen.
In the eighteenth and nineteenth century, fashion illustration was a popular way to communicate new fashions to young ladies of fashion. Women living in the country could goggle at London fashions in periodicals like Fashion, and Londoners could in turn gawk at what the New Woman was wearing in the United States in Godey’s Lady’s Fashion, and what Parisian couturiers were dishing out to the ton in periodicals like Costume Parisien. Older fashion plates were hand painted and tinted, though colour lithographs became popular towards the end of the nineteenth century. Though they started with illustrations of women in enticing costumes, tower-high headgear, and unlikely positions, fashion plates graduated to a complete mise en scene, with group scenes, elaborate scenery, and everyday or exotic locations. Fashion plates and early photographs were printed and circulated in magazines and periodicals, though, often, dancers like fin de siecle dancer Lois Fuller, coy actresses like Alice Russon, and Camille Clifford with her glamorous hour-glass figure, were featured on cigarette cases and postcards. Between the two world wars, fashion photography quickly eclipsed the use of fashion plates.
Posted by Amita Murray at 01:58