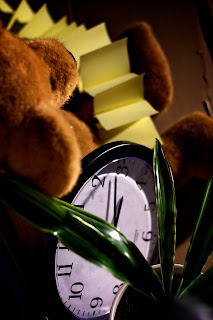 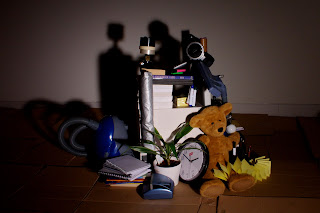 A Bear, an Umbrella, and a Sticky Ex-Girlfriend
(First published in Writing Raw http://writingraw.com/assorted.html at http://www.writingraw.com/files/A%20Bear%20an%20Umbrella%20and%20a%20Sticky%20Ex-Girlfriend.pdf)
There is nothing more seductive than the idea that you can reinvent yourself. That you can throw off the leashes of the past, do away with crippling insecurities and wounded hope, and emerge a whole new you. Psychotherapists make a living out of the belief that happiness lies at the end of the next therapy session, while Lady Gaga, who looks more like a Dr. Who pastiche everyday, has turned the art of reinvention into an evolutionary imperative. The rest of us, meanwhile, colour our roots purple, listen fervidly to the interpretation of our personality offered by Cosmo, and visit life coaches to figure out who we could be if we could only escape who we are now.
If you aren’t a blonde pop-sensation, however, turning into a new you as you sit in the loo every morning and contemplate the meaning of life may not be quite so simple. The status quo holds a fatal charm, and as Marge Simpson would say, “I’ve dug myself into a happy little rut here, and I’m not about to hoist myself out of it.” In Laminated (produced by Lincoln-based theatre company Shooting Fish), Charlie, a flailing young writer played by Johnny Vivash, sits amidst the detritus of his life, packing away the ghosts that haunt him, in cardboard boxes that refuse to remain shut. If he can but escape the cold and critical voice of his mother, his clingy ex-girlfriend Katie, and the pompous publisher who knows nothing of literature and has asked him to turn his life’s work – his masterpiece, no less – into a children’s book, then maybe he can outrun his past and find the success that eludes him. Or – and this is his greatest fear – will trying to fly only prove him to be devastatingly average?
Old conversations repeat in Charlie’s head. His mother, as represented by a retro seventies dress in a faux-Japanese print, tells him in no uncertain terms that he is “not a writer, he writes – a small, but important, difference.” Frigid and unable to love, she is a poor substitute for his father who died when he was a child. All that remains of his father now is a hat stand, a blue mackintosh, and a muddle of contradictory memories.
Then there is Katie (Emily Bignell), his ex-girlfriend, who he met on a pier a long time ago, and who commits the crowning offence of loving him too much. Her cloying hands and her cream-cheese voice follow him everywhere and tattoo his failings as a lover into his brain, where they sit in judgment next to his failure as a writer. Does Katie need him too much, or is she in fact the woman that he desperately wants not to love?
Wracked by obsessive guilt and narcissistic self-doubt, Charlie’s only real source of support is his persevering teddy bear. Hobbes to Charlie’s Calvin, teddy sets out on a journey of self-discovery to reclaim Charlie’s soul. He climbs a steep mountain, braves a plundering ocean, and finally, in the highlight of the play, fights off a murderous umbrella. In the end, teddy gives Charlie all his devotion, and wins for Charlie freedom from the shabby little town in which he grew up and in which he can only ever see himself as a provincial wannabe. (Think Simon Doonan and the beautiful people, just angrier, and minus the jazz hands and the Goyard manbags.) But even as Charlie emerges as a promising writer and escapes the geographical confines of his past life, he comes face-to-face with his ex Katie, and with the fact that no matter how far he runs, in the end, there is no escaping himself.
Vivash and Bignell deliver convincing performances as tortured artist and eternally-patient girlfriend, and Shooting Fish founder Darren Bolton has produced a compelling – though at times a trifle long-winded and in need of tightening – script. But it is puppet master Robert Tygner and his puppets that steal the show. Tygner has Spitting Image under his belt, the odd Muppets episode, and the goblins in George Lucas’ Labyrinth. In this Arts Council-funded reprise of Shooting Fish Theatre’s 2008 Laminated, he, along with choreographer Gary Clarke, makes the ghosts of Charlie’s past come alive. Since we are a seasoned audience of the slick Wallace and Gromit stop-motion animation, and the motion capture technology used to create characters like Gollum, it may come as a surprise that Tygner’s puppets, instead of looking tacky, or at best sort of cute, come across as endearing, oddly lifelike, and hilarious. While the dolls that represent Charlie and Katie, the dress and the hat-stand that mime his parents, and the publisher-monkey are charming, it is quixotic teddy, with his wide-eyed valour and dreams of grandeur that steals the day. To teddy goes the Oscar.
Laminated
Shooting Fish Theatre Company
Tristan Bates Theatre,
Till February 19, 2011
Read a short review on London Festival and Fringe http://www.londonfestivalfringe.com/indexposttag.php?slug=amita-murray and long review in Writing Raw, February 21st edition.
Posted by Amita Murray at 13:21