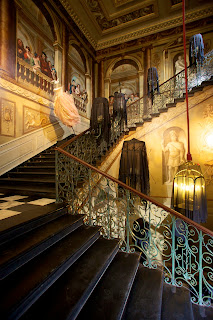 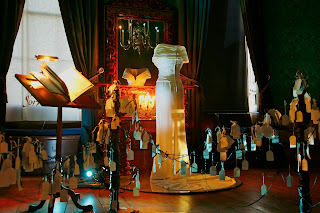 As the £12million makeover of gets underway, the state apartments have been transformed into a treasure hunt for the seven princesses that lived there from the seventeenth century all the way to Princess Diana. If your favourite dream is to fall down a rabbit hole and make eyes at the Mad Hatter, or you keep your visions realistic and a tour of a Tim Burton set will do for you, or, as a final resort, you are just a garden-variety voyeur, then the quest may be just the right medicine.
Queen Victoria’s boudoir houses a Princess and the Pea style bed (minus Sky Broadband), a cast of enormous string puppets and a William Tempest dress to tell the story of Victoria’s youth in which she penned stories and dabbled with watercolour. A Vivienne Westwood frothy confection catapulting down a staircase could be Cinderella leaving the ball, but it tells the story of Princess Charlotte, who defied her father, rejected the suit of the Prince of Orange (aka The Young Frog), and married dashing Prince Leopold of Saxe-Coburg. The displays, underlined with the princesses’ often tragic and melodramatic lives, are studded with arty fashion, spooky wolf howls, and historical artefacts like satin slippers that belonged to Victoria’a children, and Princess Margaret’s wedding tiara. Flitting amongst these are “tour guides” in gray jumpsuits and head torches who ad lib about the building works.
The interactive, multi-media display is a great excuse to learn about the history of the palace, and get a quick summary of the monarchy, at a time when there is renewed interest in the romance of royal princesses. While the exhibition would make a great day out for children, as an adult, I could have done with more history and biography.

Email ThisBlogThis!Share to TwitterShare to FacebookShare to Pinterest
Labels: Exhibitions