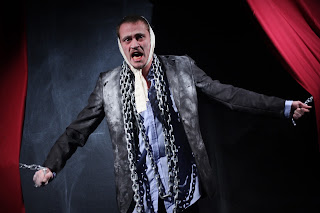 Sell a Door’s A Christmas Carol, directed by David Hutchinson and Anna Schneider, recreates the loneliness of Scrooge as he sits at his desk in the Christmas season, jealously counting his money, and enjoying an orgy of mutual hatred with the world. The directors of the Dickens classic use the small stage of the Greenwich Playhouse and a modest budget to maximum effect. They place a live musician with his computer and keyboard in one corner of the room; use the actors and dancers in the production as stage hands and helpers between scenes; and they draw a series of quick-fire sets on the blackboard that acts as backdrop for the play – a surprisingly effective device.
Stephen Barden successfully brings to life Scrooge’s melancholic, solitary existence, while the young cast does justice to the somewhat holier-than-thou Cratchetts, and the various ghosts that pay Scrooge a visit in his home. Tara Godolphin and Jess Mock shine as the ghosts of Christmas present and past respectively. Godolphin in a neon-green dress, a size or two too small for her, totters about in high heels, and gives us a tarty interpretation of the former, while Mock animates her preaching with a coy and flirty, mock-angelic version of the latter. The singing and dancing interludes are effective and Christmasy, though there are Christmas horrors in store for Scrooge, so the play is not an ideal Christmas treat for the young ones.
The paragraph in the promos and programme that points to the similarity between this classic tale and the current banking crisis does the play a disservice, however, in that it raises expectations that there will be more in the script that satirizes, or at least signifies, the current economic climate. I would definitely be up for watching an adaptation of A Christmas Carol that was actually set in today’s recession, where Scrooge could be the epitome of a Northern Rock banker, and Cratchett his hapless employee, fearfully trying to guard against redundancy. I wouldn’t mind seeing a gay Fred, fighting the good fight against his homophobic uncle. However, this is not the case here, and the play is simply a fun, and somewhat contemporary, adaptation of the original.
If you are into fringe theatre, then Sell a Door is a company to watch. They tour widely and successfully, one of the few fringe theatre companies to do so without any funding. Upcoming adaptations include Lord of the Flies and The History Boys.
A Christmas Carol, Greenwich Playhouse, Till January 15, 2012