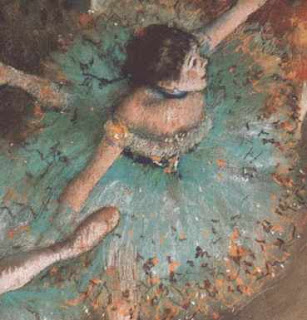 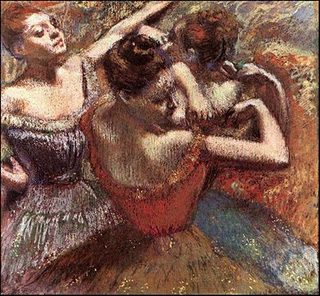 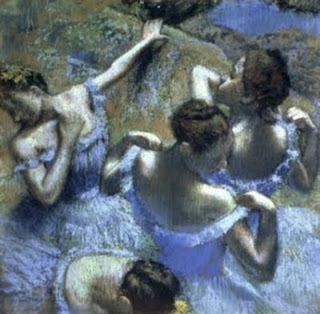 There is something exquisitely voyeuristic about Degas’s (1834-1917) peek into the lives of nineteenth-century ballet dancers. In a backdrop of frothy tutus, and a canvas of dancers posing in unison as they launch into an arabesque, a ballet dancer sits with her head in her hands. Her legs are splayed and a pedestrian wrap around her shoulders keeps her warm in the cold of a Parisian studio. Degas, in his lifelong rapture with a dancer’s movements, catches not only the magic of muscles working at their best, but brings to life the curse of a dancer’s body that does not behave exactly as it should. A body that crumbles. Injures itself. That fails. That continually seduces. And perpetually falls short.
The exhibition at the Royal Academy of Degas’s studies of the human body in motion spans his career from his early, realistic portrayals of dancers in rehearsal studies and dance classes, to his later, bolder, more impressionist work that he painted often in one dominant hue. Sumptuous aqua tones, throbbing reds, and canary yellows mark this period, and though he continued to refer to himself as a realist, there is a definite heightening of the squiggles and splotches that brand him as an impressionist, and a telling juxtaposition of humanity and wilderness. The challenge of catching human locomotion through art was a characteristic of Degas’s period, and scientists like Etienne-Jules Marey, with his forays into fixed-plate chronophotography, inspired Degas’s work, as did the realism of popular illustrators like Daumier and Gavarni. While Degas captures the magic and the disappointments of a dancer’s existence through his work, he steers clear of delving into the murkier corners of the psyches of his nineteenth-century subjects who, outside of the effervescence of their chosen profession, often lived lives of devastating poverty, utter dependence on the largesse of their patrons, and the painful reality of cold, bleeding feet. Degas, instead, catches a shoulder strap as it falls off a shapely shoulder and the strength of a pair of legs as they pas de bourree on a wooden floor on pointe. Despite such a compulsive engagement with human flesh, later in his life, Degas turned more and more into a recluse, believing that a social and personal life were in conflict with an artist’s need for a vivid inner reality.
While the Royal Academy does a good job of displaying many of Degas’s oils of dancers, some of his sketches and studies of the human body, and many photographs of the moving body taken by his contemporaries, the exhibition nevertheless leaves you with a not-quite-full stomach as you walk out of the last room. It is the paintings Degas did in his later years that are so captivating, and the show leaves you wanting more of this aspect of his work.
Degas and the Ballet: Picturing Movement, Till December 11, 2011, Royal Academy
http://www.royalacademy.org.uk/exhibitions/degas/
Published in London Festival Fringe http://londonfestivalfringe.com/general/post/?p=13877