Picasso Exhibition at the Tate 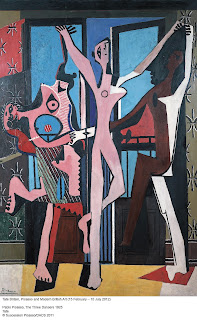 Published in The London Word http://www.thelondonword.com/2012/04/picasso-fashion-and-style/
If you saw the nature-inspired prints of Mary Katrantzou’s S/S 2012 collection at London Fashion Week and Issa’s silken fabrics, you may be forgiven for thinking that colour blocking is so 2011. Only die-hard enthusiasts of geometric fashion, like Yves St. Laurent, would keep on rehashing those stiff-point collars and pair colours like navy blue and purple, after all.
And you wouldn’t be wrong. The relentless trapezoids and octagons of 2011 – Prada, Celine, Balenciaga all followed where YSL led – have given way to the Madagascar: Escape 2 Africa feel of 2012. It’s exotic birds, clashing swirls, and exploding bubbles all the way this year. And in fact, even YSL can’t help going a little floral in their cruise line.
But if you think geometric prints are a throw back to the 1970s, look further into history. It was just over a hundred years ago in 1910 that the Spanish painter Pablo Picasso first exhibited his cubist paintings in the U.K. The reception from the art community was chilly. Only Picasso could look at a set of orange and yellow triangles and call it The Three Musicians. Only he could reduce nature and character to cylinders, spheres and cones.
Even as the avant-garde went into a fizz over Picasso’s insight into the human condition, the art critic GK Chesterton said of Picasso’s Portrait of Clovis Sagot, “a piece of paper on which Mr. Picasso has had the misfortune to upset the ink and tried to dry it with his boots.” Winston Churchill promised to give Picasso a kick in the rear if he encountered the modernist, and Evelyn Waugh ended letters with the words “Death to Picasso!”
Yet, Picasso’s odd ability to reduce the world into its most basic form continues to inspire art and what many would call art’s cheap younger sister – fashion – today. From Antonio Berardi’s relentless monochrome to DKNY’s horizontal stripes, 2011 runways were a cubist artist’s wet dream. Even 2012 trends with their exotic swirls recall some of Picasso’s later, more African-inspired paintings, like the Women of Algiers series with its interlacing of conical shapes with giant boobs.
Picasso himself took an interest in clothing when he designed the costumes for Sergei Diaghilev’s The Three-Cornered Hat or Le Tricorne in 1919. You don’t have to look further than Picasso’s costume for the Chinese Conjurer to see asymmetric blocks of colour. His Le Tricorne (1920) is the perfect mix of Victorian flounces and vertical stripes, while another costume for Diaghilev, with its red-and-black striped skirt and its tiered-cake hat, would not be out of place in a YSL collection.
Check out these and other paintings by Picasso at the Tate Britain this season. The exhibition, though it does not include some of Picasso’s classic paintings of musical instruments, does include a panorama of works by many artists – David Hockney, Duncan Grant, Francis Bacon – who are inspired by the great modernist.
Picasso and Modern British Art
Tate Britain
Till July 15, 2012
http://www.tate.org.uk/whats-on/tate-britain/exhibition/picasso-modern-british-art?gclid=CPSMyYHGua8CFcwTfAod5xTEhg 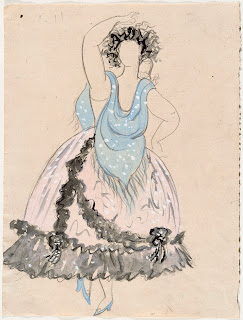 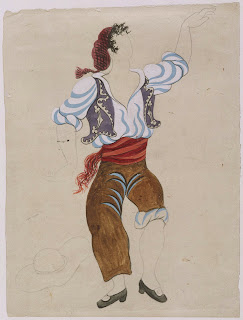