The Best of British Ballgowns, V&A 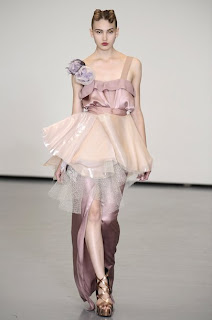 When Vesper Lynd (played by Eva Green, in Casino Royale, 2006) walks into the Casino Royale in Montenegro where James Bond is playing a high-stakes poker game with Le Chiffre, all eyes – including Bond’s – turn to watch her in her aubergine gown, with its plunging silver neckline, its sexy little knot at the centre of her chest, and the kiss of the long skirt around her thighs. Lynd is a complicated character. Vicious, cynical and prickly on the outside, with a startlingly black hole of longing on the inside. Her dress – picked by Bond, of course – matches her personality. An unusual colour, an enigmatic V of silver, and a confident hugging of the curves.

Then there is the iconic black-embroidered strapless gown that Sabrina (played by Audrey Hepburn) wears for the Larrabees’ garden party in Sabrina, 1953. Remember that dress? White gloves? Detachable train? Rumour has it that Hepburn, ever the style queen, chose this confection from Givenchy’s S/S 1953 collection. “His are the only clothes in which I am myself,” she said of the designer. “He is far more than a couturier, he is a creator of personality.” This dress, too, has something to say about the wearer – Hepburn, the elegant ingénue, a curious mixture of naïve schoolgirl and pink champagne.

To celebrate the opening of the newly renovated Fashion Galleries, the Victoria and Albert have opened the 2012 summer season with an exhibition of ballgowns displayed over two floors. The exhibition scans sixty years of British eveningwear and features designers like Hussein Chalayan, Alexander McQueen, Erdem, and Jenny Packham. Iconic gowns include Norman Hartnell’s concoction for the Queen Mother, Princess Di’s “Elvis Dress” by Catherine Walker, and dresses worn by Sandra Bullock and Bianca Jagger. Each gown (whether you like the dress or not) has its own unique imprint – for some, this is the stamp of the designer, while for others, it is the wearer that has left on the gown a hint of their perfume.

The Norman Hartnell gown is a full-bodied cream silk, with a multitude of gold-embroidered colonial-style tentacles (a little too Memsahib for my tastes, but who’s arguing with the Queen Mother?) The Erdem is a bird of paradise, with a canary-yellow bodice, and a skirt that Van Gogh wouldn’t sneeze at (actually, neither would the exotic bird. It may actually try to make a nest in it.) The McQueen confection is, as always, a show stealer. A full furry-licious skirt with feathers hugging the bodice, this dress is definitely more glamorous swan than fuzzy chicken. The Roksanda Ilincic is a different kettle of fish. My favourite retro-rose colour, with shimmying bits of lace and silk, this is a stunning pastiche of a cocktail dress – probably not an Ilincic that you can find on Net-a-Porter, huh? 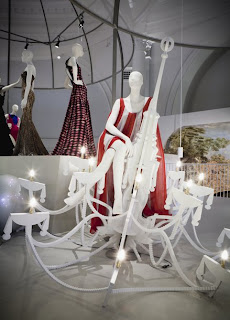