Hollywood Costume at the V&A 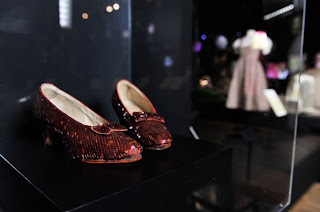 If you’ve never watched even one Marilyn Monroe film, you’re still likely to have a mental image of her in a flyaway white dress, standing above a vent, trying to keep the hem of her dress from travelling up to her neck. This was in the film The Seven-Year Itch. In another Billy Wilder film – Some Like it Hot – rumour has it that Monroe had to film one simple scene more than fifty times. All she had to do was knock on a door, enter a room and ask for a glass of bourbon with those seductive red lips of hers, but she kept getting it wrong. So, maybe she wasn’t the best actress in the world, but Monroe had such strong personal style that it takes only a few iconic accessories – a mole on the cheek, a blonde bob, and a white dress – to perfectly capture her look.

This is the alchemy of a good Hollywood costume designer. In a few simple strokes, they tell a character and a story. Think Ruby Slippers and you are instantly transported to the world of the Wizard of Oz. There were around fifteen ruby slippers created for the film, of which Judy Garland wore several, and the dead witch and the witch of the East wore others. A pair of these notorious slippers are now on view at the V&A, along with iconic costumes such as those worn by Captain Jack Sparrow (Johnny Depp in Pirates of the Caribbean), Rose DeWitt (Kate Winslet in Titanic), and of course Indiana Jones (Harrison Ford in Raiders of the Lost Ark.) You can also buy a pair of ruby slipper earrings at the V&A store.

On display are interviews with actors like Robert De Niro and Meryl Streep, talking about the role that costume has played in bringing their characters to life. Streep, who remarks on how her strong opinions about her costumes can often make the life of a costume designer difficult, says, “On every film, the clothes are half the battle in creating the character. I have a great deal of opinion about how my people are presented. We show a great deal by what we put on our bodies.”

The exhibition is divided into three sections. The first deconstructs screenplays. It shows us how the simple directions – “he wears a leather jacket, a flapped holster and a brimmed felt hat” – are transformed into Indiana Jones. The second sections deals with the dialogue between actor and designer, and how putting on a costume makes the actor feel like their character. The third – the finale – is a smorgasbord of famous costumes. So, what costume gives you your very own Becky Bloomwood moment? The Bride (Uma Thurman in Kill Bill), Dorothy’s pinafore in Wizard of Oz, or Tony Manero’s white suit (John Travolta in Saturday night Fever)?

Published at http://www.thelondonword.com/2012/11/hollywood-costume-at-the-va/
Posted by Amita Murray at 09:30