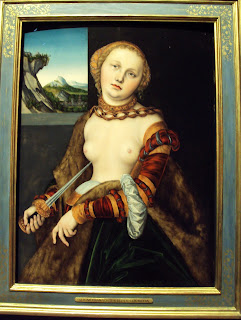 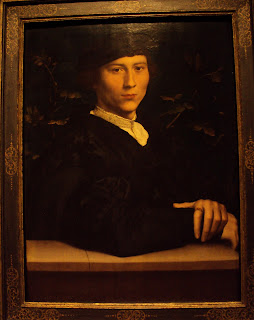 So, I had breakfast at Buckingham Palace the other week. I just thought I’d mention it. In fact, I’m thinking that from now on, I’m going to drop this titbit of information into random conversations whenever possible. For example, if anyone complains about the constant rain we’re having in London, I will nod thoughtfully and say, “Yes, but the morning I had breakfast at Buckingham Palace, it was really rather a splendid day!” Or if someone comments on the heaven that is pain au chocolat at Bagatelle Boutique in South Kensington, I will simper and say, “Almost as good as the ones from the Buckingham Palace kitchens, darling.”

The curators at Queen’s Gallery have put together a wonderful new exhibition called The Northern Renaissance: Dürer to Holbein, and their series of press views included an intimate breakfast-do for bloggers, and curators’ tours from two passionate women – Kate Heard and Lucy Whitaker – who know sixteenth-century portrait artists better than most people know their nephews. If you don’t think this exhibition is your cup of tea – if your idea of a historical painter is Andy Warhol, and you don’t do higher brow than David Hockney – then I would say, check out this exhibition. The paintings and prints are not only great examples of fifteenth- and sixteenth-century royal portraiture, but they also lead you from Brussels through Venice to London, as you watch the incredible journey of oil painting through Europe.

If you think of Leonardo da Vinci as a pioneer, think again. This exhibition charts the painters from the Netherlands tradition – like German-born Hans Memling (1430-1494) – that inspired the Italian artist and many after him. In fact, da Vinci was the first Master of the Italian Renaissance who painted in oils, a technique that travelled down from Memling, and his teacher Jan Van Eyck (1390-1441). The exhibition brings together royal portraits by court artists such as Lucas Cranach the Elder (1472-1553) and Hans Holbein the Younger (1497/8-1543), and detailed ink-on-paper prints by Albrecht Dürer (1471-1528). A gorgeous snowy landscape by Pieter Bruegel the Elder, called Massacre of the Innocents tells a story of bloodshed and poverty. The original owner Rudolph II found the pathos of the painting so overwhelming that he had the massacre of children that was depicted in the work painted over.

The curators explain how lucky they are not only to have original paintings by the masters on display, but also a lot of preparatory drawings to show alongside. Kate Heard points to a copy of the Whitehall Mural (by Holbein the Younger) that depicts a bold-faced Henry VIII, accompanied by Henry VII, Elizabeth of York and Jane Seymour, and says, “Close your eyes and picture Henry VIII, and he will look something like this painting. Remember that we don’t know what Henry VIII looked like. We only know what Holbein tells us he looked like.” These artists were not just painters, but theologians, philosophers, scientists and life-long students of human psyche and morality.