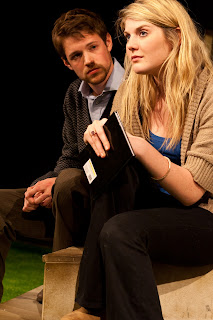 Photo: Robert Gooch
David Auburn’s Pulitzer Prize winning play Proof has inspired one of several films based on the genius and madness of brilliant minds that dazzle with their grasp of abstraction, but unlike Good Will Hunting and A Beautiful Mind, Proof enters the overlooked and closeted world of female mathematicians. The play opens as Catherine, a young woman shattered by the loss of her father who she has cared for through the last years of his psychosis and his loss of confidence in his mathematical abilities, questions if she has inherited his mania, but if she lacks the elegance of his path-breaking work.
David Hutchinson’s fringe adaptation is set in an intimate theatre space overlaid with synthetic turf that is the front lawn of Catherine and her father’s house. The action centres around the patio, with its lone wicker rocking chair, that becomes the symbol first of Robert’s growing psychosis, then of Catherine’s depression and her tentative relationship with Robert’s doctoral student Hal. In the middle of this turning point in Catherine’s life arrives her controlling sister Claire (embodied to a tee by Amy Burke), who is in turn protective and envious of Catherine’s instability that holds the promise of towering talent when compared to her own normality as a prosaic Currency Analyst.
Hilarious scenes between the sisters complement beautifully Robert’s last years (poignantly brought to life by Marcus Taylor), and Catherine’s inconsolability. Dan Cohen (who would give Hugh Grant a run for his money) shines as the bumbling, awkward drummer who is secretly in love with Catherine, but Holly Easterbrook’s interpretation of Catherine turns her into a petulant teenager, rather than the nuanced Catherine played by Gwyneth Paltrow in the film, her character a mix of acute sensitivity, strength, fragility, and a prickly reluctance to let people in.

Review published in London Fringe, and The London Word http://www.thelondonword.com/2011/05/proof/
Posted by Amita Murray at 04:58