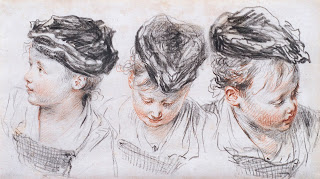 Three Studies of a Young Girl Wearing a Hat, 1716. Ann and Gordon Getty Collection
Flemish-born French artist Jean-Antoine Watteau (1684-1721), credited with the revival of baroque during the reign of Louis XIV, and flourishing in the use of a style that ultimately gave birth to rococo, had the knack of juxtaposing contradictory elements in his paintings and drawings, which show not only a sparkling wit, but an acute insight into human longing. Restless, unmindful of his future, and inspired by everything from Persian servants to travelling troubadours, Watteau’s artistic ego did not stop him from coming back to a drawing five years on and adding a disparate figure to completely transform his creation.
His simpler red-chalk drawings in the first decade of the eighteenth century made use of elaborately plumed and costumed commedia dell’arte figures to illustrate the performativity of high society. A Barber’s Shop (1709) evokes the social commerce of a hair-dressers, where men in their ornate coats and gloriously slim breeches (think Georgette Heyer at her Regency best) choose lushly powdered wigs and other paraphernalia essential to a gentleman’s comfort. This shop sign, though, is set on the proscenium stage, with tapestry curtains hiding the wings on the side. Many of Watteau’s drawings were not only an early reflection on art about art, but also inspired the popular imagination through decadent fashion plates, and garments named after Watteau.
These drawings gave way to a fuller bodied, more thoughtful, more intimate and probing study of his subjects. While these red-and-black-chalk body lines and postures show the maturing of Watteau’s skills, it is the exquisite expression in the faces of his subjects that really displays Watteau’s heightened engagement with humanity.
In his final years, along with an interest in female and male nudes caught in moments of pensive self-absorption, Watteau’s skill in drawing fete galante was at a peak. This was a style of art that displayed men and women of ton lolling in parks, and living a life of leisure, or, as in the case of The Remedy, a reclining, naked woman waiting for her maid to give her an enema. Yet even in his erotic drawings, and his depictions of noble life, Watteau seemed not to draw the physical beauty of a person, but instead penetrated their thoughts and feelings. It is in the wistful, shy, vivid and vibrant faces of his subjects that Watteau’s keen sensitivity to people, and his trend setting, though short-lived, talent really come to life.
Read review on London Fringe.
Watteau: The Drawings
The of Art
Till June 5, 2011
Posted by Amita Murray at 11:35