Miro: Up Yours to Genre 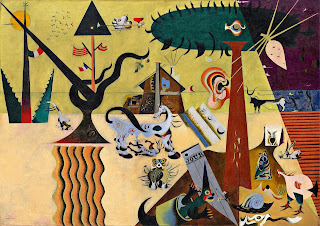 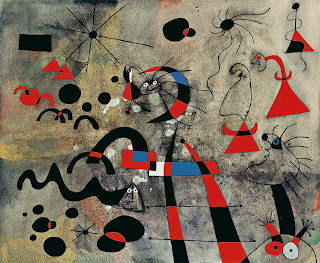 The Escape Ladder, 1940, Successio Miro/ADAGP, Paris and DACS, London
Walking through a Miro exhibition may feel like an epiphany, or if you are particularly susceptible, an existential crisis. A mind-boggling mating of precise lines and cubic shapes, with ferocious intensity and an up-yours-to-genre kind of philosophy, seems to be Joan Miro’s (1893-1983) signature style.
It may be a little bit like deep sea diving. of colour hit you from all sides. Men and women from a post-nuclear freak show sit around a table and discuss Goethe. Creatures are boiled down to their very essence, and pedestrian objects take on a life of their own. And you are left to loiter between an overwhelming desire to stare at his art forever, and an equally intense need to run for your life.
Born in to a family of goldsmiths and watchmakers, and heavily influenced all his life by Catalan politics – the declaration of a Catalan Republic of Barcelona in the 1930s, and then General Franco’s dictatorship – Miro’s work shared many Surrealist ideologies. Stubbornly anti-bourgeois, and always in key with the life and work of Catalan peasants, Miro juxtaposed unexpected elements in his paintings and sculptures – a dog, a moon, a ladder, perhaps a woman who looks like one of the Twits, or maybe people with insignificant faces, stick-like bodies, and humungous genitalia.
Nevertheless, Miro steered clear of aligning himself to any particular school of art and continued to experiment all through his life. The exhibition at the Tate Modern shows continuous curiosity, an unwillingness to stick to any one style, and a fevered experimentation, so that each of the twelve rooms of the exhibition and each decade of Miro’s life seems to be a testament to a constantly evolving style. Influenced by Surrealist qualities, Cubist reintegration of geometrical shapes, and a Fauvist fascination with loud colour, Miro’s art stands outside the bounds of all of these schools. Yet, walking through the exhibition, and confronted with pointy breasts and monstrous vaginas, you ask yourself, yikes, did he hate women?
His works show not only towering skill and a strict precision of line and detail, but an utter lack of fear in breaking the “normal” confines of life and art. He blended folklore with philosophy as easily as cruel caricature with the workings of the subconscious mind. As Miro said, “The works must be conceived with fire in the soul, but executed with clinical coolness.”
A philosophy and exhibition not for the fainthearted.
Miro. Tate Modern, Till September 11, 2011
Review published on London Fringe
Posted by Amita Murray at 04:24