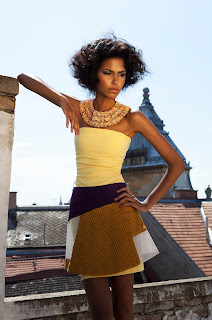 So, what do you get when you mix a Nigerian palette with the minarets of Budapest and the design know-it-all of fashion capital London? An intensely modern collection of women’s wear with kooky cuts and breathtaking simplicity. Funmilayo Csilla Deri was born in Nigeria, and having traipsed her way through Switzerland, Hungary and North Wales, Deri is now a quintessential Londoner – belonging everywhere and nowhere at once.
After leaving behind a prosaic banking career that didn’t curl her toes, Deri, taking a leap of faith, trained at the Istituto Marangoni in London, and started her fashion label Funlayo Deri in March 2011. Her designs show the Marangoni influence in their trendy, melting-pot look, and reveal her startlingly postmodern sensibilities.
In her Sp/Su 2012 collection, a bias-cut silver sheath fits like a glove, and shows just a peak of an indigo animal-print slip underneath – a layering, you might say, of spaceage couture with a little Belle de Jour. Says Deri, “I design for the modern woman; she’s confident, sophisticated, captivating, a woman who loves life, is cultured, and has an individual sense of style. She is not a slave to trends, but is a trendsetter herself.”
Deri seems just as comfortable experimenting with silk, taffeta and crochet, as she is with earthier hemp, and mimicking this juxtaposition, her models, though dressed luxuriously in flyaway purples and chic geometric patterns, are often framed by industrial murk and urban skylines. The Sp/Su 2012 collection is inspired by architectural lines, and is a potpourri of the strident and the sexy. Her collections stem both from her mix of cultural backgrounds, and her mood of the moment. She chooses her themes “based on what is going on around me at the given time, and stirs me towards certain music, people, places, etc.”
Her Au/Wi 2011 collection displayed at Africa Fashion Week in New York, and Sp/Su 2012 at Felicities Presents, during London Fashion Week. Having started designing and sewing with her mother and grandmother, Deri now aspires to design for labels such as Louis Vuitton and Gucci. Her penchant for triangles and trapezoids show a glimpse of Balenciaga 2011 collections, and the influence of the granddaddy of geometric patterns, Yves Saint Laurent. Even from the time of her first collection Labour of Love, which Deri dedicated to the woman who labours, a collection that showed a mere hint of a distinctly personal style, but didn’t quite come into its own, Deri has travelled a long way in just a year, and her designs seem more comfortable in their own skin – a trait that they perhaps share with their dynamic creator. 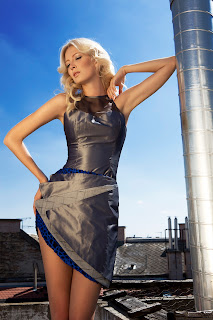 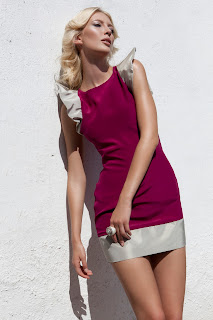 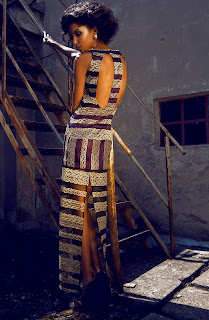