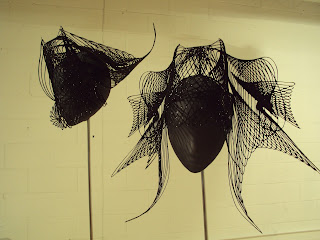 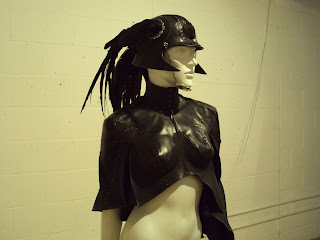 Calling this tucked away pop-up exhibition The Future of Fashion is overstating it. While a London Fashion Week fringe event that features designs from ’s recent graduates is a good idea, the title may smack of delusions of grandeur, and would serve the exhibition better by saying it like it is. So, I am re-naming the exhibition Eat Some Pie at Bill’s because the thing that gave me the biggest shock and awe in this trip to Covent Garden was the discovery that Bill’s from Brighton has now stormed London (or it will once people know St. Martin’s Courtyard exists.)
Still, some of the exhibits are worth a visit. Emma Yeo’s award-winning hat confections give rise to a spooky Isabella Blow flashback, with their quality of half-hiding the face, their combination of fragility in a sturdy frame, and their inevitable bird-in-flight air. Though I admit I am more lustful for the quirky designs on her website, which include millinery in the effervescent spirals of a sea shell nestling a pearl in its heart, and a tiara of silk flowers that look like curly wood chips.
Three exhibits in this collaboration between accessories manufacturer YKK, and designer Kei Kagami feature bird feathers. Besides Yeo’s, there is Rob Goodwin’s funky leather bustier, that moulds the chest like a Roman gladiator’s habillements, with buttons lacing up the neck, and feathers on the head gear. Vogue Italia and British Vogue have commissioned Goodwin’s leather helmets. Then there is Yunus and Eliza’s complicated metal frame that supports hawk feathers on the head, with a chandelier hanging from the helmet.
The loft-like space that houses the exhibition could be a hip fringe-art gallery with a vintage clothing rack and a platform for indie bands, but may be sadly on its way to becoming a shoe shop.
Check out my new review of The Future of Fashion exhibition on London Festival Fringe.
http://www.londonfestivalfringe.com/indexposttag.php?slug=amita-murray
Posted by Amita Murray at 07:31