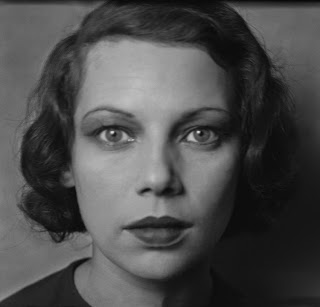 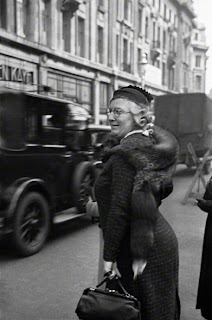 Regent Street, London, 1934. 2011 Curatorial Assistance, Inc/E.O. Hoppe Estate Collection
A robust matron wrapped snugly in a wool coat, fox tail draped with a singular lack of irony around her neck, chest proud and hips thrust out at the commuters behind her, waits to cross a street in her West End shopping spree (1934). She clutches her handbag tightly to discourage the pickpocket. A waitress Miss. Vyse, the first “Nippy” to have starred in J. Lyons and Co. advertisements, looks the picture of kindly but promising virginity, as she stands poised, balancing an empty silver tray in one hand (1925). “Sandwich Board Man Advertising Shafi Hindustan Restaurant” grins at the camera, with a billboard around his neck in war torn (1945). These are just a few of E.O. Hoppé’s sensitive, droll and unsentimental snapshots of city life in between the two world wars.
It was the end of the , the loss of innocence brought on by a savage First World War that yet had no premonition of the horrors of the second, and a time of blatant appropriation from the colonies of the “Orient.” Yet it was also the era when young women shed their beribboned corsets, unshackled their zippy bosoms, and demanded the right to work and vote, and artists and intellectuals lounged in smoking rooms and artists-only soirees, and theorized about sex, psychology, and the cavities of the human mind. Hoppé’s invaluable archive of this lost time period is one of the most probing and influential of the modernist photographers, yet the collection was all but lost to posterity when Hoppé in a feat of spell-binding self-deprecation sold his collection to an anonymous London library in 1954, where it was catalogued by subject and scattered in dusty, lightless hallways, till it was reconsolidated forty years later. Though his work was more often published and written about in the early decades of the twentieth century than that of his contemporaries like Alfred Steiglitz and Paul Strand, for many years his name was not listed as one of the great modernists.
His portraits show serious-browed shaggy-moustached young men with thin, frowning faces; languishing flappers in Grecian sparkly dresses ready to break into a Charleston if they can but lift their boneless limbs from the lusty Oriental couch at their side, like Teddie Gerard (1915) who wowed London audiences at the Hippodrome in Hullo, Ragtime!; and lavishly costumed Russian dancers like Vaslav Njinsky as the Spectre de la Rose (1914), a flower child sewn with dying rose petals.
Scornful of the idle rich, Hoppé was clear-sighted in his interest in women who were thinkers and doers, women who would plot the course of the early feminist movements. His own wife Marion was an enterprising woman and ran a dressmakers. She helped support the couple after Hoppé left his bank job to become a professional photographer. Yet, despite his enlightened views on femininity, Hoppé was very much a man of his times. While many of his portraits are etched with glittering captions – dancer Ted Shawn (1922), the haunting actress Tilly Losch (1928) with her uncontainable beauty, Frederick Ashton’s favourite muse Margot Fonteyn (1935) when she was a mere sixteen-year-old chit, others are simply and with spectacular generality and arrogance titled “Cuban Beauty” or “Haitian Beauty.” At the same time, a portrait of Madame Wellington Koo (1921) is suffused with a mystical and other-worldly fog, and accessorized with the tiny generic figure of a robed Chinese man.
Like other intellectuals of the early modernist period, Hoppé was deeply interested in personality type, and strived in his portraits to find the meaning behind the face. Besides his pursuit of “Fair Women,” Hoppé photographed many celebrated men like Albert Einstein, sexologist Havelock Ellis, playwright George Bernard Shaw, intellectual Paul Robeson, and the Duke of York before he made his now-Oscar-winning “King’s Speech.”
The only danger with consuming this exhibition is that it is like eating dark Swiss chocolate with a glass of bubbly – once you start, you just can’t stop.
Hoppe Portraits: Society, Studio, Street
National Portrait Gallery
Till May 30, 2011
Read short review at London Festival Fringe http://www.londonfestivalfringe.com/indexposttag.php?slug=amita-murray
Posted by Amita Murray at 01:12