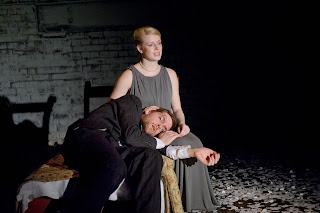 
Helen Edmundson’s rapturous adaptation of Leo Tolstoy’s towering epic Anna Karenina, brought back to life at the Arcola Theatre this spring, is as much about Levin’s idealistic love for Kitty as it is about Anna’s fatal attraction for Vronsky. Max Webster’s skilful direction and a considerably talented cast of actors and physical performers supports Levin’s journey from faltering, wrought declarations of his love to Kitty which she spurns, through the throes of unrequited love, to his eventual acceptance that love is not the perfect dream that he has imagined – that the reality both falls short of, and ultimately trumps, the fantasy.
Anna, meanwhile, satisfies her hunger for meaning in life by falling for Vronsky, a dashing Byronic military man and jockey, who heats her blood like her prosaic husband, twenty years her senior, with his righteous lectures on local politics and big offending ears never could. As Alanis Morissette would say, every hot blooded woman needs an object to crave, and Anna is no exception. Anna’s craving for Vronsky eventually leads her from the empty life of a social butterfly to complete social suicide.
Forming the backdrop are Anna’s brother Stiva and his wife Dolly who struggle to come to grips with Stiva’s chronic infidelity. A theme throughout the book and the play is the idea that though society a tickled by the sexual adventures of men, women pay the price for their own and their partners’ illicit passions – though the truth is, suggests the book, that women pay the price no matter if they follow those passions or not. Dolly chooses her family over her own feelings, and sticks it out with Stiva, even though she knows her happiness is threatened by the next housemaid in a short skirt or the Bolshoi’s next favourite dancer. Anna pays the price of giving up her son and losing the goodwill of the gentry when she leaves her husband to travel with Vronsky through . When they return, Vronsky carries on as usual, dining, drinking and cavorting with his friends, while Anna is refused entry into society. As always, Tolstoy gives us a weary view of the world.
Using a trendy theatrical devise, the actors change clothing and accessories to take on multiple personalities. They become abstract figures at times, and towards the end of the play they come together and transmogrify into the train that is to be Anna’s destiny. The set is transformed with zip and verve into the snowy Russian countryside, the streets of , a railway platform, a sparkling drawing-room, and a votive-lit altar. The scene where Anna and Vronsky dance in the street, as snowflakes flutter all around them, and later when spring blossoms, is bewitching. The Arcola’s new site, a nifty warehouse-conversion on

Ashwin Street
, with seats on three sides of the stage, and even a row of “balcony” seats, adapts well to the shenanigans of the cast. In one memorable scene, Anna is transformed into Frou-Frou, Vronsky’s horse, that he rides with so much thrust that the mare has to be put down.
No one can accuse Tolstoy of brevity, and the danger of adapting his work is not knowing when to stop. It is difficult to adapt something as looming as a Tolstoy novel, one that appeared as a serialized epic (1873 to 1877, The Russian Messenger.) This two-and-a-half-hour adaptation tends to drag a little, but despite that, it convincingly weaves multiple storylines with physical theatre, spiffy set direction, a dash of humour, and a lilting soundscore. Vronsky provides humorous interludes by performing a caricature of the love struck lothario, and cast members with a black mask on the face play Anna’s nightmare of death. This is not the first time Helen Edmundson has set herself the task of adapting a heavy duty Tolstoy epic. She adapted War and Peace for the National Theatre in 1996, and put her lightness of touch to George Eliot’s Mill on the Floss for Shared Experience Theatre. While she retains the dark passions of Tolstoy’s novels, she sprinkles joy and humour into the adaptation, that keeps the story from being entirely grim and cynical.
Anna Karenina
Arcola Theatre
Till April 16, 2011
Posted by Amita Murray at 08:29

Email ThisBlogThis!Share to TwitterShare to FacebookShare to Pinterest
Labels: Best of 2011, Theatre